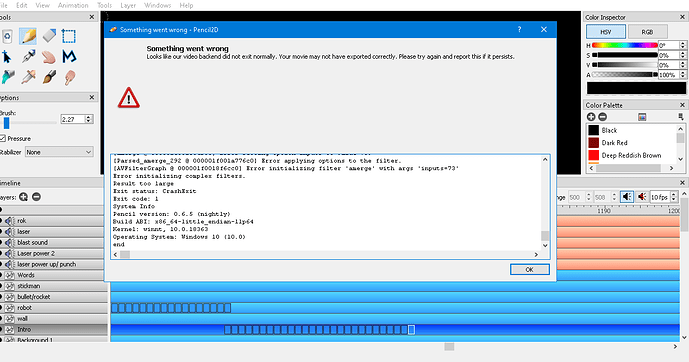 I wonder what went wrong.

@Bignoob Can you please try restarting Pencil2D and exporting again? If that does not work, please copy all of the contents of that box at the bottom of your error dialog and paste it all in a message here.

You’ve got an very large project with a very large number of sound effects which could be contributing to the problem. For future reference you generally want to break an animation up into smaller parts than than this and combine them afterwards with a video editor. Also be sure to make backups of your project if you are not already.

For future reference you generally want to break an animation up

I know that its large with lots of sound effects. I will paste the content soon Some of the sound effects are 44100 hz and others are 48000 hz. The breaking part is what I thought of.

I think this is what you want. The bottom part of the content.

@Bignoob To be honest this is the first time i’ve seen this kind of problem. Is it possible for you to share the file with us? We often recommend wetransfer.com since it has a way to send anonymous links and it auto deletes after a week.

You can learn how to send a link transfer here: https://wetransfer.zendesk.com/hc/en-us/articles/115004254743-How-do-I-send-a-link-transfer-

And you can paste the link in this thread. We’ll delete it from the message afterwards if you want to keep it private.

This is the link for the pencil2d project I was finished with which pencil2d displays a error when creating a movie. 15MB file.

@Bignoob Ah ok. I see part of the issue. Just as a general rule please don’t overlap sounds on the same layer Always create a new layer for each sound that needs to be overlapped on the same frame range.

Since Pencil2D does not have crossfading or fancy stuff like that, but even if you were using a pro video editing program, you musn’t ut one sound on top of the other on the same track.

I removed all the overlapping sounds and deleted the “laser” track and i managed to export without problem. Probably the laser track had one file at some point that got damaged and without being deleted it keeps referencing that. We’ll see what the devs can find with more specialized tools.

Create two new sound tracks, one for the sounds that are overlapped and another one to replace the “laser” track. That should do it.

I understand now. Thanks!