When I paste a selection from another program, it pastes it on the lower right hand screen than on the center. anyway I can fix this?

I’m a big fan of mspaint so I like to use it to outline my animations whenever I can. But i’ve found that copying and pasting an image to Pencil2d puts it on the lower right corner instead of the center which makes doing linework very tedious as I have to keep realigning each frame. I don’t know if its my laptop or something or if the program is just like that, but I would really like to find a way to paste something directly on the center rather than on the lower right corner. Maybe i have something wrong with the camera layer but I’ve made sure that both canvases are the same size. Heres a screenshot I took to help you understand. 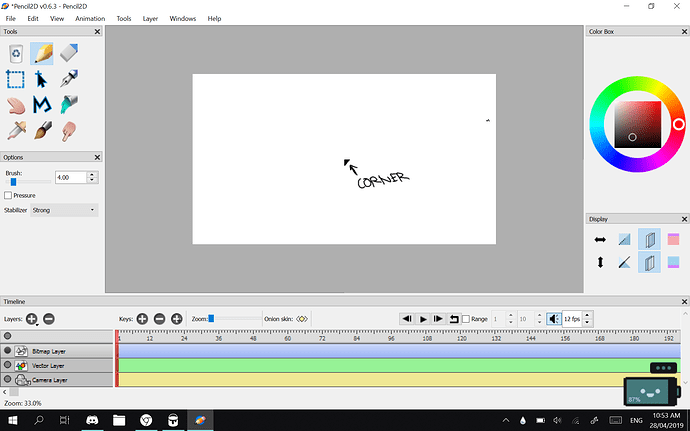 @Teaviie Hi, unfortunately this is not a bug. The coordinate center of Pencil2D is at the default center of the canvas. Your laptop is not having an issue. We understand that most programs work differently and the current implementation is not intuitive, but this comes from the original design that was made by the original developers. In the future however this is being discussed to change to a more intuitive solution.

However there are some workaround I can provide:

Afterwards inside the xml, look for the tags and look for one that has the name property assigned to the current name of the layer that holds the pasted drawing. Usually the last layer in the file is the top layer in the Pencil2D editor.

Thank you so very much for your patronage. ill go work on it right away!