What is "Extend Frame"

Does anyone know what is “Extend Frame” in “Animation” menu?

I’m not sure what menu you’re talking about can you be more specific?

I don’t have the software running here so I can’t check, but this is maybe a way to extend a frame ?
eg. if an image is 1 frame long; --> 2 frames

I means this item, it seems always disabled.

if it doesn’t work, I will remove it from the menu.

Or maybe is it in this idea… 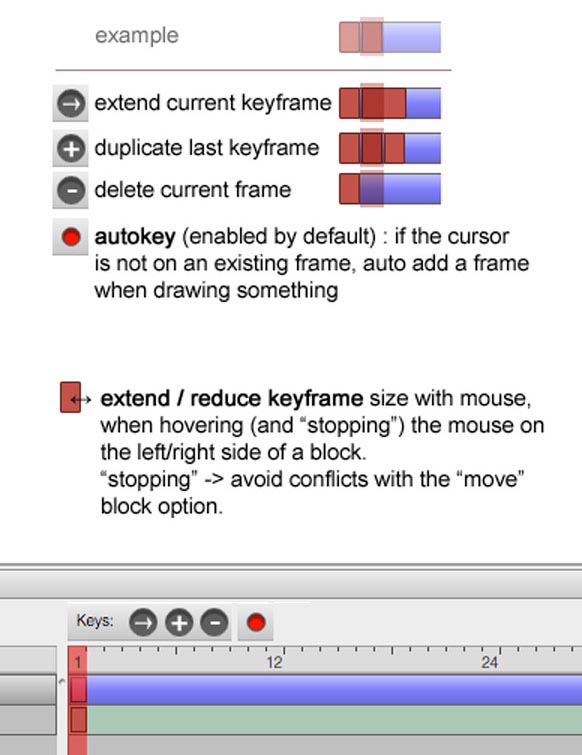 It’s for extending frames. In flash, F5 extends the frames without creating new keys and Shift-F5 shorten the extended frames. The timeline concept was similar to flash, as I can see.

ok, but in Pencil, key frame is auto extend until another key frame appear.

I’ll remove this button in next version.

Hey there Matt, the thing is that usually when you’re doing classical animation, you are bound to have 1 (singles), 2 (doubles) , 3 (thirds) or a set amount of “exposures” or frames per single drawing.

If you’re going to remove the manual frame extend functionality, then it would be nice in the future to be able to visualize the existing automatic frame extension whenever a new keyframe was placed, and to determine numerically (e.g. number input) the amount of frames that the animator wants his /her drawing to be shown in the timeline.

This is useful for example when you’re doing holds, in which you need one of your character layers (say the body) to stay static for say 6 seconds or 144 frames, and you just can’t bother counting that amount in the timeline while animating his arms, head and stuff.

Well just a thought, dont know if i should comment this in the feature request rather than as a response to this thread haha, anyway keep up the great work!.

Thank you, @morr.
It’s a good suggestion, I’ll consider to implement it.