I’m aware that vector inking and painting are probably out of the question as of now, but hopefully the light table feature could be added in the upcoming version to make tracing and level/layer separating much easier instead of me having to make a “light table” by making a white semi-transparent background via 128 alpha + white and on separate layers labeled “light table 1” and moving it between the background and level 1 for example. The current method I’m using for the “light table” takes up more space in the timeline. For example, if I had 6 levels (1 background and 5 object/character/body part levels) plus 5 of “light table” layers, plus the camera, then I would have a total of 12/a dozen layers. On top of that, if I were to go from layout and rough animation to clean-up animation, which would be twice as many object layers AND “light table” layers, the camera and background are left alone obviously since I need to just swap from the rough background to the clean-up background, leading to a grand total of 22 layers, almost 24/2 dozen. Let me explain: for example, the order would be something like clean-up 5, clean-up light table 5, rough 5, rough light table 5, and the pattern is repeated for the remainder of layers except for the background and camera obviously. If the need to make the “light table” layers were to be eliminated, for the clean up animation and rough animation, I would have a grand total of just 12/a dozen layers! I’ve added a picture to this topic to demonstrate the order of layers. It would be super helpful! Not only that, but it would also be more efficient. I hope that the light table function will be added again, as it was in previous versions. Now, as for vector coloring, I hope it gets improved for future versions of this wonderful piece of software. I’m looking forward to the new version, even if it takes a while for it to be ready for release! 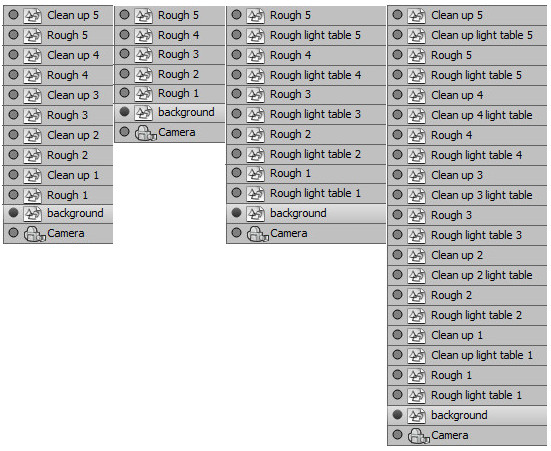 @JacobZeier1992 A light table mode will be added back in the next version and it will work as seen in this feature description: https://github.com/pencil2d/pencil/pull/1160

As for anything related to vector layers we have to wait until the current backlog tasklist is cleared and vector improvement becomes the main focus of development.

I honestly don’t know when this will happen but I’m hopeful that it could start next year, however this is only a personal estimate and the true ETA depends on the developers. Thanks for your comment

Thanks for the reply, Jose. You’re quite kind.

I know, my post is a bit wordy, but I think it’s important that I clarify what my problems are.

It’s a good thing that the light table will be added back in the next version. I am so thankful and proud of this company for doing so. I understand it would take a long time for the vector tools to progress the way that we hope. Like you said in one of my earlier posts is that you recommend me using OpenToonz for efficient tracing and coloring, but I’m OK with using Inkscape to serve that purpose, even if it is a little time-consuming. I would assume that OpenToonz already has the light table function as well.

In the past, since I was 16 in 2009 to about 2015 at age 22, I used the proprietary software Toon Boom Studio 5. As of around 2015, Toon Boom Studio and Toon Boom Animate has been discontinued in favor of Toon Boom Harmony. I’m so grateful to live in 2010s and 2020s where open-source software is far more common than ever before. Who needs proprietary software when you can just use free open source stuff? Granted, there are businesses who do rely on proprietary software for whatever job it can serve. Proprietary software is made so companies that make them can make a profit and to give people jobs to provide care for themselves and their families. I’m just talking about proprietary software in general, regardless of business type. Luckily, something like this, Opentoonz, Plastic Animation Paper Pro 4.0, Tupi and Krita are free for everyone to use. It’s kind of like public domain software in the sense that it doesn’t have as many copyright restrictions. It’s always good to have free software, especially if it’s open source, which generally implies unique and sophisticated. You can’t go wrong with that.

Anyway, I can’t wait for the vector tools to be fully functional and I’m sure it will happen someday.

On second thought, the long list of layers method is probably the best I would recommend, minus the background since that can be done by importing a semi-transparent background sketch that I would make in GIMP.

This topic was automatically closed 28 days after the last reply. New replies are no longer allowed.