Something is wrong. I can feel it. ( Loud sound warning ) 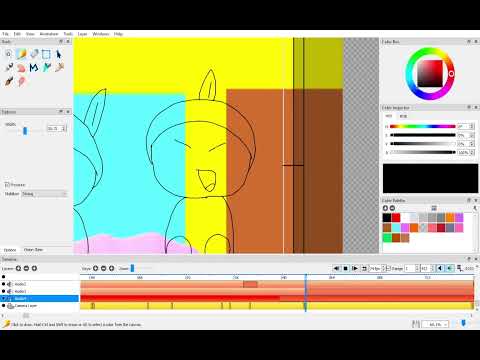 All that audio clip was supposed to be was chickens- but now!!!?

This is definitely a bug, but it’s complicated and probably hard to replicate.

Feel free to ask questions at your own risk.

@JoeyH Oh my god. I’m so sorry! I never saw this message

This could happen for various reasons before it’s even Pencil2D’s fault. From hardware it could come from an overheated CPU, to a chock full RAM, to a failure in the audio processing units in the motherboard.

From the software side it would entail that your audio drivers are not up to date or incorrectly configured.

Lastly if it was Pencil2D’s fault, it could be the Qt framework audio engine (which is what is currently used) along some obscure incompatibility with your specific hardware, which is … well nearly impossible to detect or fix.

Now, quite frankly this actually sounds familiar. Last May my main PC motherboard fried and I got a replacement mobo, but I kept getting issues and a distinct problem was similar garbled noise signals.

After a lot of debugging I found a pattern. It kept getting overheated and the first sign that it would reboot was similarly messed the audio as your sample. It seemed the AMD FX990 chipset had various complaints where some mentioned you could literally hear the noise sound lbefore it froze and you had to reboot (and I even experienced it twice).

The way to reproduce such thing was to stress test the computer (I opened two browsers with YT, opened a 3D game, opened after effects and made it render, all at the same time) and it would fail 100% in the same way.

I’m not saying you should do that, but you might need to check if your computer starts to break too much when doing “intensive” work or gaming. Might be a deeper issue.

I’ll stay vigilant when using Pencil2D just in case, but in this case it could be about anything.

I admit that post was sort of a joke, because it never occurred again after it fixed once. I must have been tired when I posted that. However, I cannot disregard your reply because it contains a good list of possibilities that help me understand these issues better. Thanks again!

(I tried to delete this post after I made it, but it says I’m not allowed to. But your answer may help other people, so it’s fine now!)