It also occurs whenever I select a tool. I use the latest version v0.6.5 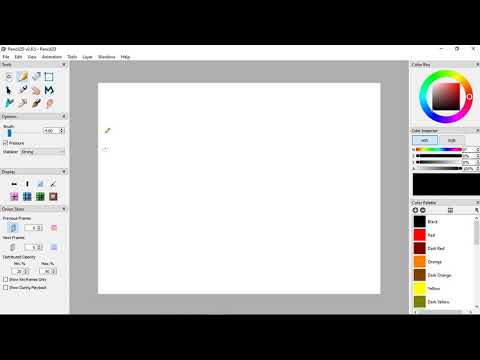 @aymanugod Hi. Thanks for reporting! We got a similar report recently. It seems this is happening on screens with non standard resolutions, and are too narrow vertically.

So it seems It’s not exactly because of pressing ALT, but rather that when you press ALT the tool changes temporarily to the tool options change too, and this pushes the timeline downwards where it can’t be seen for some reason.

Some of our devs were fortunately made aware of this problem, so we hope there is a way to issue a fix soon enough.

For now I can only suggest a workaround meanwhile there’s confirmation for a fix, and that is to stack some of the less used panels so they don’t take all the vertical space on the interface. You can stack for example the onion skins panel on top of the display panel and this will let you use them with TABS. Also stacking the color palette on top of the color inspector will help too.

By stacking I mean this:

I also have my own toolbar panel laid out horizontally like this, and it really helps:

Thanks for the reply! I’m new to Pencil2D and might probably start animation as a hobby

@aymanugod No problem. I’ve already reported this issue to the developer bug tracker. Let’s hope this can be solved at some point. If you have any other issue let us know.

Pencil2D is still considered beta software, so we’ll also be releasing as soon as we can a video that shows some known issue so new users like yourself are aware of what are the caveats of the program.

Since you’re using windows 10 by all means please take a look at our windows exclusive guide too: [Guide] How to Train Your Pencil2D (Windows)

It can help avoid common tech pitfalls that affect the program on Windows systems.

For some reason I can’t play the video? It said Access denied.

@chchwy It seems to be a problem with streamable.com and discuss embedding. The direct link to the video is this one: https://streamable.com/eqd1z0 hopefully that works, though it’s probably going to expire in a few months, so i’ll see if I can upload to youtube later.