Same problem here: About a half second to one second pen lag when starting a line in pencil, pen, and highlighter mode, causing an unintentionally straight initial segment. This problem does not occur in MSPaint. Also doesn’t occur in Windows Ink Workspace Sketchpad which was made available when the drawing tablet was installed. Haven’t tested with any other software.
Pencil2D v0.6.2
Win 10 Home (10.0.17134 build 17134) Acer Aspire F5-573G x64
Drawing tablet is Monoprice 10 x 6.25-inch Graphic Drawing Tablet (4000 LPI, 200 RPS, 2048 Levels), bought around Feb 2, 2019. https://www.ebay.com/itm/371223113451
Bug also appears in GIMP 2.8.10 running on a Win7 x64 HP workstation, except that the lag is more like a quarter second.
Here’s a possible hint or maybe only a red herring: When I put the pen to the tablet and do NOT move it I get an OS menu as if I right-clicked on a mouse. Maybe the OS withholds actions until it knows whether to present the menu? 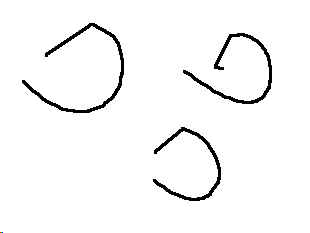 These were intended to be three quickly drawn circles, starting at about 10 o’clock.

@Athena Hi Sorry to hear your also having this problem. Unfortunately I’m not sure Monoprice graphics tablet are supported by this software. Currently support is provided to hardware that has a wintab drivers interface (e.g Wacom, HUION, etc) but we’ve had issues providing support for other types of graphics tablet outside of this spectrum simply because we don’t have the manpower to create patches for every tablet manufacturer and in order to create specific interfaces you need to pay money to the hardware vendors which we do not have as this is basically a non-profit org.

It might be better to recommend you to find a different software that suits your needs as Pencil2D graphics hardware support is very limited due to the core framework that is used to build the program, however with that said I thank you for actually providing a reference for your tablet, i’ll consult with the developers and look around if there’s any way to solve this problem for Monoprice users in the meantime, other than that I’m afraid I can only offer you an alternative animation software list to peruse and try to find another software that does work with your tablet.

@Athena An additional step you can attempt is to try the latest development version and let us know if there are any improvements at all in comparison to the previous Pencil2D version:

Copying my solution above for clarity in this thread:
** Control Panel -> Hardware & Sound -> Pen and Touch -> Pen Options -> Press and Hold -> Settings -> Uncheck the upper left checkbox, “Enable press and hold for right-clicking”.**

Apologies I had not seen you solved it by taking those steps. Thank you for sharing your solution!

This tablet is, in terms of technology, very old fashioned. drivers don’t work with photoshop, and it doesn’t look like they’ll ever be updated .

It’s a decent starter tablet, but I found it disagreeable with my art programs of choice, particularly regarding pen pressure. There WAS pen pressure of course, but coming from a different tablet that I had used previously (but broke), I found the pressure lacking in comparison, especially with smaller px brushes.

I’ve since upgraded to a XP-PEN Deco 01 V2 https://www.xp-pen.com/product/461.html and as expected, I have a greater range of pen pressure now. This might not matter to you, especially if you’re just getting started in digital art, but as someone who draws comics it ended up being an annoyance.