Ok, so, when I’m animating, it usually looks very hand drawn. All the animation coagulates and shapeshifts in between frames and it looks like a mess. I’m order to avoid this to a certain degree, is there a way in Pencil2D to hand select or select a portion of the drawing (like in procreate) and move it frame by frame kinda like stop motion instead of having to erase and redraw every detail for a new frame so it doesn’t look like a mess?

Cuz I wanna make my character Mark peek from a corner but I don’t wanna make it look sloppy.

I have done something like this in my experiments. It is a bit complicated. Here are the steps.

Tip: Animate Mark on his own Layer.

I do a similar thing (if not the same thing) as Ralmon there, where I copy the part I want to change to a separate layer (I call it the Draft layer), color it in red, move it, rotate it, etc. Then I can keep the proportions correct in whatever I’m doing by tracing the next frame over it: 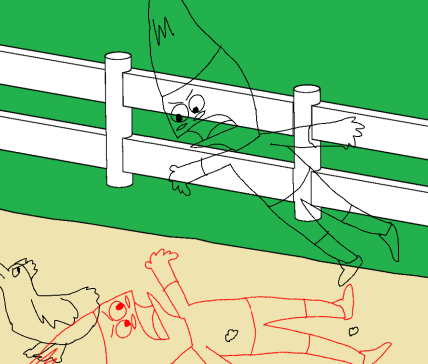 (I rarely scale my drafts because I primarily use a sort of orthographic view in my scenes, but for most people, it’s very important)

This is called Shift And Trace technique. Most animation software have dedicated features for this.