EDIT2: After restarting, AND re-calibrating my pressure sensitivity with the tablet driver, the problem is fixed. I wonder why it happened in the first place.

So I recently got back into Pencil 2D after months of disuse.
I downloaded the latest nightly version (as visible in the photo), and tried using it.
It’s not much different from when I used it before, but one thing I noticed was that:
Whenever I touched the pen onto the tablet, in order to draw a line or shape, the line would draw a straight line for a fraction of a second, making these weird shapes instead of the “C” shape I am trying to draw.
As you can see, if I do the same thing in MS Paint, it works normally. So not my tablet’s problem. (I used the same tablet well in Pencil 2D previously, anyways.)
I think it may be a slight “lag” problem, except the SAME THING happens, even when I draw very very slowly. So even if I take 5 seconds to draw that “C” shape, it still makes the same weird line. If I try to do it quicker, sometimes it just makes a dot and ignores the rest of the stroke.
EDIT: This also happens when using the stable version of Pencil, or the first version in the “nightly builds” list. This is frustrating. 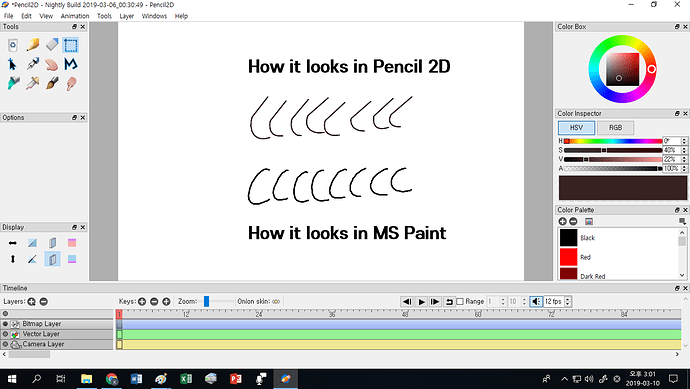 Good to see that you fixed the issue.

The reason you might not have seen the same problem in MS Paint could be because it doesn’t interpret tablet events, as such your pen will just act a a mouse.

As a rule of thumb: if you experience lag in such consistent ways that you describe, it’s often a result of windows interfering with your pen. A restart or re-plugging the tablet will usually fix the problem.

Had the problem only occurred if you drew fast, then it’s a lot more likely that it was caused by Pencil.