Nothing happens again. I tested all three versions from day 20th… and pencil2d doesn´t start

Ah… I should mention that you probably need to delete the brushes folder from appData/roaming/pencil2D/Pencil2D, when you’ve done that, try to open the application again

edit: I’ve just tried on my windows 10 setup, with the newest build and everything works.

I’ve made a bunch of changes to hopefully get rid of those nasty white blobs that appeared when using cursor preview.

Bonus: Preview cursor has correct size now, the feather ring however is gone but maybe that’s for the better.

We rely on mypaint brush state now to get the actual brush size… this might be a problem because the state is only updated when drawing, so whenever you change the brush size, the old cursor will be shown until you’ve drawn.

That solved the issue Oliver

I downloaded the last one from 21th and it is working fine. Thank you

Lets see what I’ll bring next

By the way, have you ever thought about implementing a full-screen mode? See image That will save a little bit of space for the canvas itself 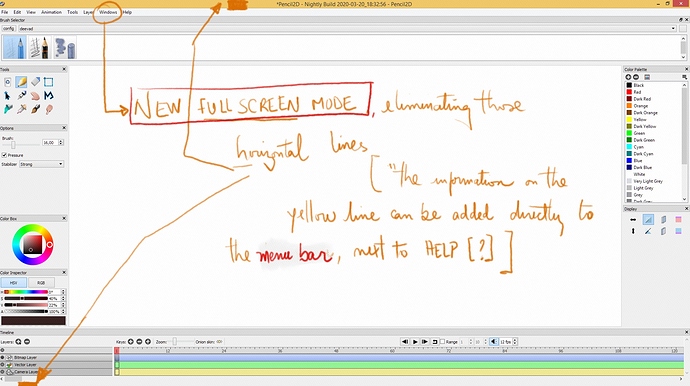 IMAGEs and ANIMATIONs created with MyPaint version of Pencil2D Your Stuff

I was made aware that artifacts still appeared when drawing on multiple layers, this should now be fixed.

By the way, have you ever thought about implementing a full-screen mode? See image That will save a little bit of space for the canvas itself

You can request that on our github, it would be useful and we’ve had it requested before but it’s not part of my mypaint integration, so feel free to make an issue about it there

@CandyFace that’s been indeed requested by him ever since last year https://github.com/pencil2d/pencil/issues/1151

Hi, for some reason the newest builds won’t launch for me. The one for February does, as does the “regular” nightly from March 29th. March 18th, 21st, and 27th don’t start up or even give an error message (I also tried running as admin); the stable build also launches fine.

As an aside, that stroke lag problem I mentioned earlier doesn’t seem to be in the March 29th build.

@Noobimator have you tried this

I should mention that you probably need to delete the brushes folder from appData/roaming/pencil2D/Pencil2D, when you’ve done that, try to open the application again

Sorry, I missed that post. But that did work, thank you.

Tested this for two days and it was perfect. One more wish but feel free to ignore,. Could you please add xsheet feature? One thing that stopping me for not using this great piece of a software for production is the non-existent of that specific feature, simply because we usually put our cue for lipsync and notes for the inbetweeners inside xsheet.

As a person who’s been using tvpaint for almost a decade, the brush feels almost identical. Thank you, sir

We have an x-sheet timeline in the works, so it’s coming. The mypaint integration too should hopefully also get into the main branch when it’s done. There’s still some time before that happens though. X-sheet will not be added in this branch alone, I hope that answers your question

Glad to hear that, thank you! Really appreciate your hardwork

I think I’ve found a glitch with the brush configs, it refused to consistently save my configuration. I can get around it or consistently save the config by choosing the brush next to the one I was customizing. The build I was using is this version pencil2d-win64-2020-03-30 from Candyface’s gdrive…

1 file sent via WeTransfer, the simplest way to send your files around the world

Also don’t mind the miss aligned cursor in the video, it’s a bug on my screen recorder. Thanks

I released a new version yesterday, fixing a couple of things about the brush config logic. The save button is also gone, changes are saved automatically now. See if you can reproduce the bug in that one

New version fixed it, thanks @CandyFace

This release is mostly bug fixes and re-adding functionality, like the ability to rotate the canvas.

I’ll attempt to merge with our master branch next, since I’ve got enough mypaint painting working, except for some onion skinning and related. There’s been quite a few changes in my painter for this to work but also changes in the canvas painter on the master branch, so we’ll see how that fares…