Hi, this is a bug I’ve already posted about once but I’ve just had the same issue again so I’ll put a better description in here and make it the last time I post about this (if I should delete this topic let me know). I am using version 0.6.1.1 of Pencil2D on Windows 10. 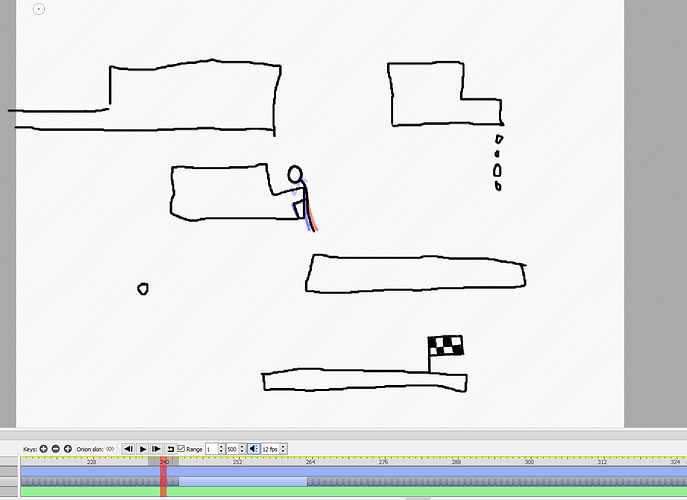 I caused the issue by moving the set of frames starting at 264 to the right, creating the gap in the timeline. I then added more frames in this gap, drew in the stick figure (its arms still haven’t been added in these frames) and this caused all the frames after 309 to get messed up. By ‘messed up’ I mean some are out of order on the timeline, some have been deleted entirely, some have been duplicated, and all of them have changed position on the canvas without an obvious pattern, as shown on the gif export. I immediately quit without saving but it autosaved so I can’t go back to the previous version.

I recognise I’m using an older version of Pencil2D so if nobody knows what’s going on here I could just try updating and seeing if that helps, but until then, does anyone know if it’s possible to reload an older save, or disable the autosave feature so I’m not stuck with a corrupted file in future? Anyway thanks for taking time to read!

Help; Frames all messed up after adding some in the middle of animation
JoseMoreno (Jose Moreno) 10 August 2022 00:50 #2

@splentaz Hi. First off thank you for letting us know about your issue. I’m sorry to read you’re having problems however it’s unfortunately expected from an older version of the software.

Since you already know you’re using an older version this makes it easier. Please consider updating the app.

You can have two different version of Pencil2d in the same computer since you don’t have to install them, they run as a semi portable app.

Your issue seems to be tightly related to a series of problems that were present (but fixed) in the older versions where literally moving a large amount of frames would, as you put it, mess up the drawings by sometimes erasing them in the operating system temporary file directory or, as in your case, jumbling the frames.

I could try to advice you to use a different file type for saving since back then the .PCLX format was new and had some issues as well which have been contributing to the whole file corruption thing more than we knew.

So very cautiously try the following:

Note: As long as these files & folders are near each other Pencil2D will be able to open the animation.

Try using that and mess up with the timeline by moving a ton of frames like you did before. If it keeps doing the frame jumbling or if frames are deleted afterwards, then consider upgrading the Pencil2D version if possible.

Unfortunately If you insist in using the older version, this issue will keep happening as it’s a problem with the source code, it’s not a problem of how the software is being used and it doesn’t have a workaround AFAIK.

Thanks so much for the very detailed response!

I realise being several versions out of date is rather digging myself a hole when it comes to bugs, if this is fixed on the newer version I will probably just use that in future.

@splentaz You’re welcome. Of course we always recommend upgrading the version, but I realize sometimes users can only run up to a specific version because their hardware is older than the norm. We do support down to Windows 7 and macOSX 10.12 or so, but even then Pencil2D is never going to be perfect, so we also caution on trusting the software “too much”.

Always make hard backup copies after every milestone on your project (like finishing a cool movement or visual effect). This has saved my ass in the day job for over 10 years after I messed up and lost 1 month of work because I though Adobe After Effects was, oh so professional and wouldn’t crash and zero out my files

Anyway, if you do have more issues (and I’m sad to say this but you will have more issues) let us know to see how we can recommend you better workarounds or straight up link you to a new version that has a specific fix. Best regards.

but I realize sometimes users can only run up to a specific version because their hardware is older than the norm. We do support down to Windows 7 and macOSX 10.12 or so, but even then Pencil2D is never going to be perfect, so we also caution on trusting the software “too much”.

The legacy builds of v0.6.6 run down to Windows XP and Mac 10.7. There’s almost never a good reason to use an older version of this program.

You’re right! I’m sorry I recalled from memory last night, my bad. Kept thinking about the upper limits of the legacy versions, and even that was inaccurate