It's being annoyingly glitchy

so it was working okay until I started adding more bitmap layers. Whenever I would add a new layer I would only do a single frame and since the sofware would make the image stay there until I added a new frame it made my job so much quicker, and I’'l manually drag the layhead and scroll and it’ll look fine, and then one of the images on my layer will carry over to a part of the animation I didnt put it on and won’t let me remove it, here’s a screenshot It’s hard to describe sorry) 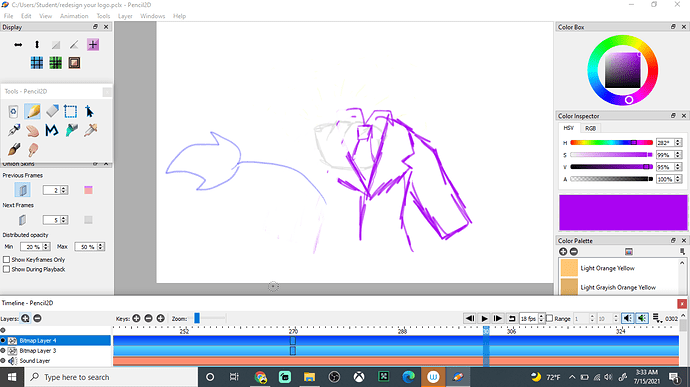 I did not put that suit and tail there, they carried over and if I try to erase it will remove them from the frames they were supposed to be on in the first place, whys this happening, it’s making this so

It’s hard to say exactly what your issue is without seeing the full project file, but it looks like you are just seeing the onion skinning from previous frames. The onion skin feature is controlled from the panel on the left, and exists to show a tinted version of previous and/or next frames to help with animating (inbetweens in particular). It can be turned on or off by click the buttons that look like stacks of frames in that panel.