Is there a camera preview?

Before the full implementation of the new camera system, selecting the camera layer and playing a camera motion would “preview” (to some degree) the animation’s camera 1:1 with the screen… Can it still do that? Or has it been lost during the implementation?

If I need to elaborate, just ask…

I’m the one who has worked on the new camera, since I found the old cameras 1:1 useless and irritating. So, the old way has not been ‘lost’ during implementation. It’s been removed.

If I want to preview my animation or camera movement, I export it as video. It’s a matter of seconds to make the video, and that’s not much compared to the hours I use animating, clean-up, coloring and so on.

If you think the old way should somehow be re-implemented, you’re welcome to suggest it as an issue.

All right, Thank you!

@davidlamhauge What I believe @JoeyH is asking is about the capability to see the full resolution or output size of the animation in the editor, hence the mention of a 1:1 ratio between the camera dimensions and the video output.

To my knowledge and testing you didn’t remove this, but rather the limitation that forced the user to always see the 1:1 output regardless of user input.

Before the change anytime you had the camera at 100% it would display the full resolution and force the use to always watch that.

Now for Joey, to explain it simply, from a user perspective there two different systems working in harmony.

Currently you will be able to transform the Document / Workspace VIEW (System #1) where the CAMERA (System #2) exists, so to see the camera at a 1:1 relationship with the output you simply need to have the Document VIEW at 100% and that’s it.

Basically now you can modify both “systems” independently for easier editing, but the fundamental way we use the camera has not changed as animators. Now you can zoom in and out the VIEW, to properly gauge your shot & drawing composition, and ZOOM IN and OUT the CAMERA to properly frame the animation.

I just tested the latest nightly build at it still works like that. From a 1920 x 1080 pixel resolution the camera at 100% took all my screen, so you can ZOOM OUT the VIEW to see the whole camera frame even if the resolution is the same as your screen monitor.

hope this helps to clear it up. 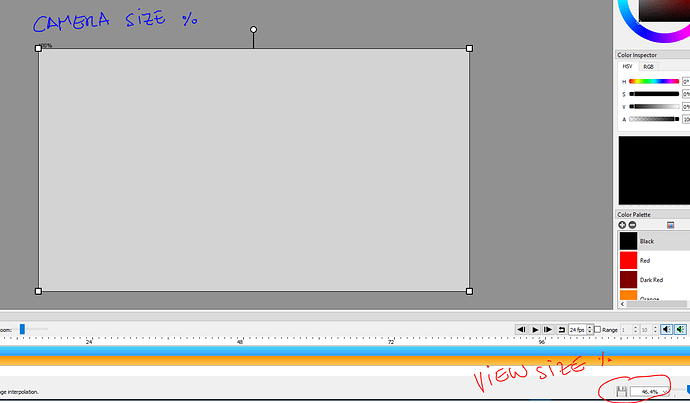 I personally think the new system is way better

Thank you for all the hard work and for pushing all these improvements along with MrStvns!

On a different consideration, at some point I’d love to discuss with the team having a pre-rendered or pre-cached embedded video player to playback the raw images along the raw sound, to avoid FFMPEG rendering (if possible, or at least make it so it works in the background) and that way see a quick preview of our animation with proper video and sound sync.

This would go along way to help users to preview their work without disrupting the flow of their work.

I think DJVU (DJV) has a similar feature to almost automatically process uncompressed image sequences as a video, that could serve as inspiration for a future discussion.