Information for the peg bar- what is it?

(There is a video on this, but I’d prefer a written explanation at this moment.)

I know what a peg bar is in cel animation, it is the bar used for properly aligning the cels together to prevent excessive shifting of layers.

However, I do not know what it does in this particular software (I’ve heard it’s real useful). For me, and for anyone wondering: What exactly is the peg bar feature? What is it used for? How does one go about using it?

A peg bar keeps the draawings aligned to the BG, FG and other layers. If someone draws on paper, using a pegbar, they can use this feature to use scanned drawings in Pencil2d. They will be aligned and imported to P2D so you can keep working on your scene(-s), even if they are drawn on paper originally.

Apologies for pestering if I am; but how exactly does someone use it?

@JoeyH Don’t worry, the purpose of this forum is to provide support.

In Pencil2D as David mentioned this feature attempts to align the position of selected drawings in the active layer across multiple frames. AFAIK the way it goes about it is that it reads the luminance of pixels within a threshold (usually near black / white contrast) found inside a “search area” (via user made selection) then it tries it’s best to align similar looking pixels across time.

Note that this only matches similar looking pixels (by luminance, not shape) aligning the top and the left side parts of whatever is found inside the “area”.

However if you have a misalignment in rotation or scale, it won’t be able to correct those. For that you may want to look into a different program to scan & align your drawings and then bring them into Pencil2D (In windows you can use GPS from the Opentoonz project)

I personally think you should consider watching the video tip on how to use the feature since there are specific steps involved in using it. The video uses text instead of a voice over so it should be easier to pause and look at the steps one by one.

You can even slow down the youtube player playback speed to have enough time to understand the concepts and if you have any lingering question let us know.

This doesn’t mean it’s only meant to be used as a pegbar registration tool, other people have even used it creatively in different ways to achieve certain effects such as the following video from veteran user Manu from Cartoonspace.net where he fixed some problems with imported elements that didn’t have “classic” pegbar registration holes. 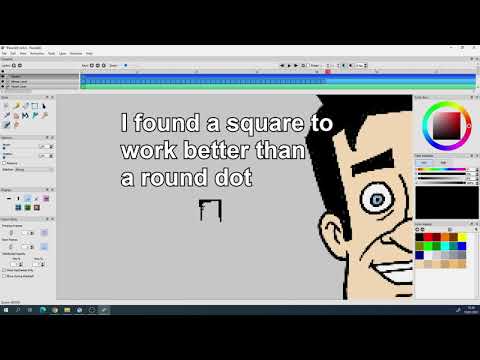 I do not know what a peg bar is but I am assuming that it is the holes that hold each cel page, kinda like a binder, and each frame they flip back and forth between the previous cel and the current, but I am not sure. (Don’t take me on this I am not an expert)

However if that is indeed what a “peg bar” is, then I recommend using the Onion Skin feature.