How to improve animation?

Welcome to the Community!

If you want one suggestion:

This may be style-dependant, but when the thing on the bottom right extends its arm, instead of duplicating and erasing the part of it, try retracing it each frame, but with the arm extending like normal. It will be a lot cleaner that way. Does this make sense?

I am really happy and obliged that someone replied me and it’s exciting to be a part of this community. This was my old animation for some reson I couldn’t send my better animation. 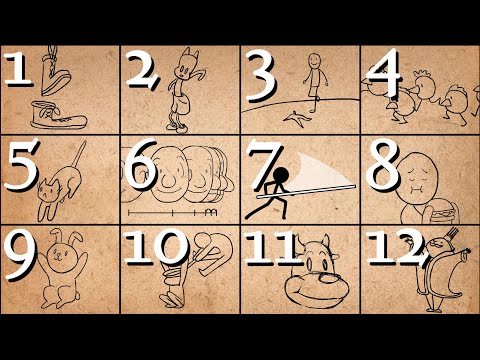 This one helps me a lot when I need assistance in animation.

@girija2 Hi. I think advice given to another person will always depend on what the animator wanted to represent on screen initially.

As an spectator I infer that the dot is a small creature flying through the screen, and I understand that another character appears in the scene ad extends their hand and the small creature will land on the character hand.

Perhaps what confuses me most is the flashing of the character on certain frames. In Pencil2D you don’t need to redraw the same picture so it shows, any drawing will automatically show over the screen across the timeline until a new frame is drawn after it, so in that sense it is unnecessary to have the “blinking” as it distracts from the main action which leads to the encounter at the end.

Animation wise, depending on your stylistic intent you might want to add some extra motions to fulfil the principles animation, which are really shorthand rules to understand the laws of physics applied to the apparent motion of an object or character.

For example when the “particle” stops, since it has an apparent velocity it shouldn’t’ stop in place, it should decelerate into the position or move a little further before “settling” into the pose, then anticipate before falling down to the character hand.

Anyway keep up the good work and have fun

Thank u so much sir to appreciate me

I have one thing to add that hasn’t been said yet, or at least hasn’t been said clearly enough. The biggest issue I have with your animation is not the animation of it, nor the redrawing of nearly ever frame (I think that can add character to an animation if done well). The issue I have is with the editing of it. The cuts between the dot and the character are too quick and too numerous in my opinion. You never spend enough time on either one of them for the images to fully register with the viewer. You can still cut back and forth between them if you want, but do it slower and give it a clear purpose. So maybe it could be a cut to a close up of the character, who then looks up at the dot, then cut to the dot and it goes from buzzing randomly around to hovering in place, then cut back to the character to show them extending their arm or whatever. In each instance you’re choosing a particular shot because you want to show something happening and you give it the time for the viewer to see what’s happening. Similarly, leave a little time at the end to show the full end text written out.

THANKYOU For your advice