Hi, have you seen how values can be edited in After Effects ?

I think it is a very smart and efficient way of doing things.
It could avoid having big sliders taking a lot of place in the interface…

It doesn’t “remove” the sliding function : you still can “slide” the value with the mouse, or entering a value when clicking it. This is the same but you don’t have a “visual” slider (which takes a lot of place).

What do you think of it ? 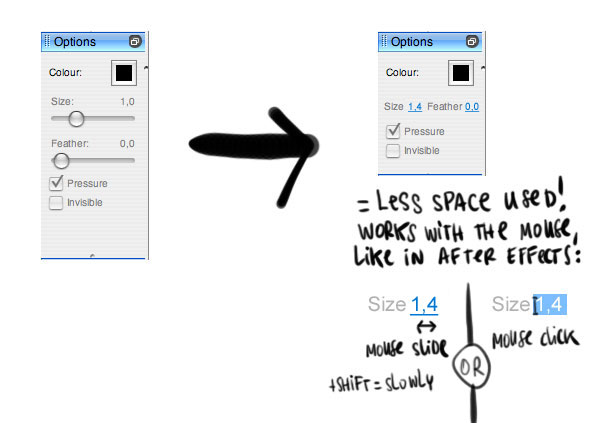 I quite like the idea. It may not be a very visual way to do sliders, but it saves a lot of screen estate - clearing it for the canvas.

Gimp developers implemented a sort of a frankenstein monster of this- combining both styles of interaction and that imo was not a great idea.
The sliders there are damn annoying.
Whats worse is that because the slider is at the end of the window and your screen, you have to repeatedly click and drag to reduce the value when its too high as it hits the wall of your screen.

Blender developers (quite cleverly) got around this problem by implementing “continuous grab” for the mouse input that teleports the cursor on the other side of the screen when it gets out of the window while grabbing a slider. It still doesnt solve the issue when you’re using a tablet.
I think you can also drag up/down as well as left/right to go around the issue a bit more. It depends on where the slider is.

Yup, I like it as well. Also when you need exact value of something (say size), it’s easier just to enter it than move slider.