Here’s my suggestion for a better onion-skin… A dream for animators (i hope !) 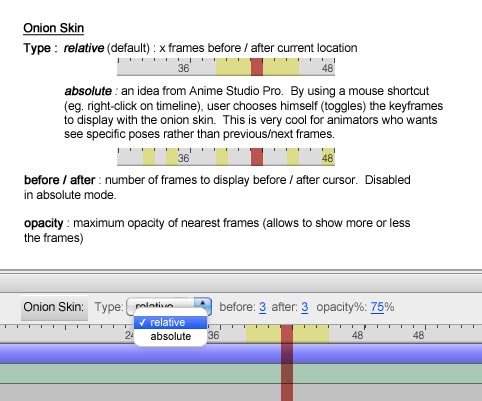 I don’t know if it’s necessary to worry about relative and absolute and all of this however I’d also like to have the multiple frames of onion. I mean the whole point is that onions have layers.

Well, trust me, I once have used a software who had a similar option and it was rrreeeeally great.
I mean, when you are animating, your KEYframes are not always the previous and the next frame. Sometimes you have a lot of inbetweens and be able to choose which frames to display is really useful.
Meanwhile, the default behaviour should remain the “relative” mode.

Yeah that’s a cool idea. I tend to add keyframes on other layer to keep track of my extreme positions. And then i have to add another empty keyframe for it to disappear when i don’t need it. It’s tricky and easy to get mixed up, especialy if you have to move the animation. Witch happens all the time when you start concentrating on timing.

I would bee awesome to say like skip this picture in onion skin and focus on these that are the important KEYframes.

But i really dream of selecting onion skin on or off like a special visibility of each layer. If there are two characters in the same sequence then when working on the second you might not want to be getting confused by first onionskins that would be in the way.

Yeah, having Onion Skinning wrap around to the first and last frame when Loop is selected would be immensely helpful and amazing! Thanks.

That @feeef guy is amazing.
See this :

Guys, I have implemented this feature! ;)

I didn’t have much time to do it so it is a bit ugly in term of interface and I still have to cleanup the code a bit but it works! It will be in my next pull request.

This feature was really cool indeed, I didn’t resist, I implemented it.

Next, I will implement a very cool way to change the number of onion skin frames the way Flash does it with dragging at the top of the timeline.

As soon as Matt accepts the pull request, you will be able to play with those features.

CONGRATULATION @feeef!.. (and THANK YOU @chchwy for all your previous and hard work, which I believe has allow @feeef to implement those sort of crazy things that he has been implementing lately)

For the first time in a long run, “I managed” to build the last MasterCode from Github. It build Pencil2D easily (Qt Creator shows about 80 issues, most of them “unused parameter xxxx”)

This one new update for Pencil2D is so mature
And I have tested the new timmeline, and it works beautifully… It is a must have for this kind of software. I don’t really understand how the relative/absolute onion skin is going to help me right now but it is also working fine!
Tested the temporary HandTool shortcut and it works fine!

Just built Pencil from the latest sources and it’s great. I like the latest addition and the bug fixes. This version is so close to replace my 0.5.4 version. I’ll try to work on this version during the weekend and see how it goes and report back if/when I find something strange.

At least the most important broken feature for me now is the import image/sequence function. That’s it. Other than that it’s just to animate, animate and animate.