When it comes to the standard animation workflow in most professional studios, we know it is generally these stages: storyboards, layout, rough animation, clean-up, ink-and-paint, and compositing. But during the rough animation stage, correct me if I’m wrong; the characters would be drawn with their basic/geometric shape before details are added in. This YouTube video should explain: 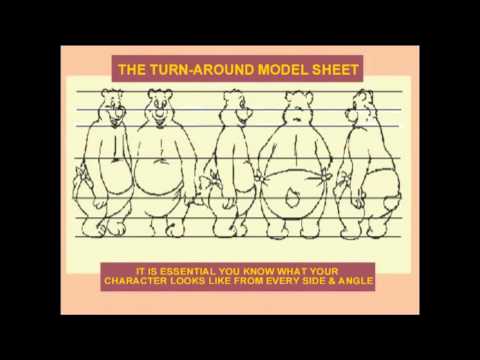 Although this does sound like a good idea on one hand, it sounds problematic on the other. Which raises the question: Should I add details on the same object level layers or should I add them by tracing the drawings on separate layers? To me, making separate layers sounds redundant and laborious. I would personally go with adding details on the same object level layers; it would be much more efficient.

As for the layout stage, it might be a bad idea to add details to my character layout drawings because they would serve as my key drawings for the rough animation stage and it would be too difficult and confusing to draw inbetweens with the details on the key drawings. Like the narrator in the YouTube video said, “Details are not added yet. It is easier to redraw a rough character than a detailed drawing. Only once you are satisfied with the action, you can start adding the details.” I think it’s best that I go from there.

P.S.: This is the second time that I’ve written this post as I’ve made it almost exactly like this almost a week ago. The reason I’m reposting is because I haven’t gotten any replies from anyone, so hopefully someone can help me with this issue. Thanks!

The animation process is often a personal one, even if all have the same start and end-point.

When it’s suggested that only animate the shapes first, it’s because you need to put more effort into it, if you want something convincing. If you can convey your idea, without eyes and hands on your character, you’ve done a good job, and the inbetweening and so forth, will be a walk in the park.

Experiment to find out what suits you best, and go from there.

PS: We are working hard to get a new release of Pencil2D on the street. That can explain why no one has answered. Maybe you should try to find forums that are more dedicated to the animation process?

That’s really thoughtful of you.

I would personally go with adding details on the same object level layers; it would be much more efficient.

That’s one step I would take. Nextly, …

As for the layout stage, it might be a bad idea to add details to my character layout drawings because they would serve as my key drawings for the rough animation stage and it would be too difficult and confusing to draw inbetweens with the details on the key drawings. Like the narrator in the YouTube video said, “Details are not added yet. It is easier to redraw a rough character than a detailed drawing. Only once you are satisfied with the action, you can start adding the details.” I think it’s best that I go from there.

More that I think about it, maybe I should draw the keys/extremes with the basic/geometric shapes first and then add the details once I’m satisfied with the action by the keys/extremes (major poses). I might add the details to the breakdowns (minor poses/major inbetweens) and the inbetweens (just/minor inbetweens). Details like fingers, mouth, nose, ears, toes, eyes, hair, etc. Adding the details to key drawings after my final decision would probably be more helpful therefore easier than adding details after doing all the drawings (keys/extremes, breakdowns and inbetweens), otherwise it would get really confusing and difficult to know where to draw the details. Of course, it’s all trial and error.

What’s your opinion about my animation approach? I’d like to know.

If I understand you right, you’ve chosen the right approach.

First draw the keys, so they are good, solid drawings, that read well. Work on your timing so it becomes even more convincing.

Then you start adding details, making timing charts, maybe indicate arcs you want your animation to follow, and then breakdowns and inbetweens.

This is of course for scenes where pose to pose animation should be used. Other scenes could benefit from straight-ahead animation. As I said - find what suits you best. 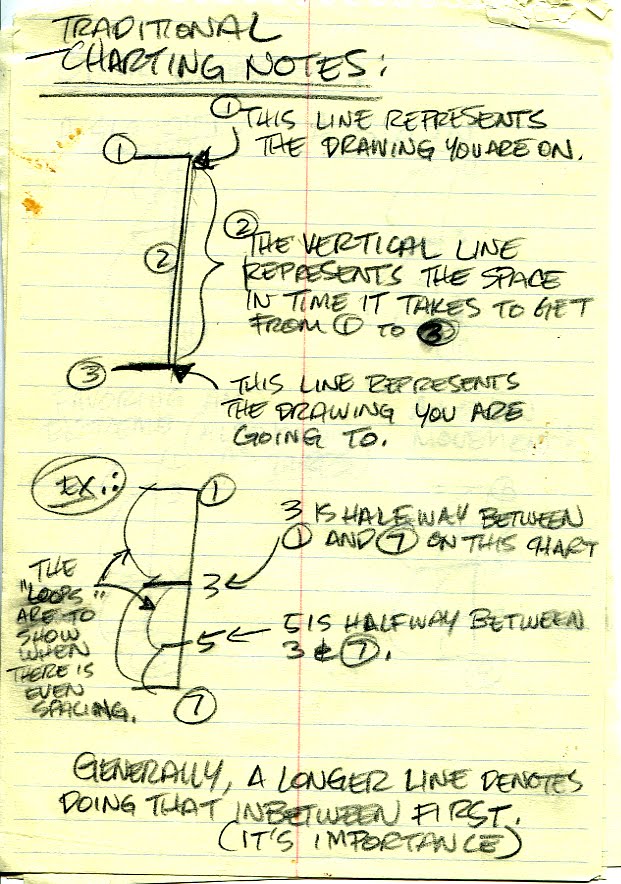 The timing grid looks a bit hard to me. I might give it a shot, though.

Timing charts are good as a reminder to yourself, what your intentions were, when you made your key drawings, or if you have some one to assist you.

Normally I only make them if the inbetween is like the latter example above, where the inbetweens should not be evenly spaced. Many animators makes them on every drawing

Hmmm… that’s nice of you to tell me your advice and knowledge, but I still don’t really see the point in using animation charts because I said they are too complicated and confusing to me.

Timing charts might be more suited for working with other people, but when doing animation by yourself it seems pointless. The most important hand-drawn animation tools to me are the onion skin, the light table, the timeline, and of course pencil and paper (on the computer, like Pencil2D). I feel that the timing chart can be easily supplanted with the timeline. I occasionally use the flip and roll functions, which seem somewhat helpful but I don’t need and don’t want to use timing charts.

Don’t you think that my animation timing and inbetweening method is easy and or any good?

But maybe I should learn how to use animation charts even if I refuse to, not to be snooty and spoiled.

Hopefully, you can reply to each of my paragraphs. Thank you.

Your way of numbering the drawings are very good. I also used circles around the frame number for keys. I didn’t underline the breakbowns. We used capital letters for the layers. Most of the time it was A, B, C, D and maybe E, but it was not good to exceed 4 levels because of the cells darkening the artwork. We don’t have these considerations now.

Since I went digital, I never number my drawings. I still make an occational timing chart, but without numbers. It works for me, and that’s the bottom line: Find something that works for you, and stick to it, until you find something better. If you work in a group, you’ll often have to comply to some standards, but if you’re on your own… not much.

Funny how you mentioned the maximum levels of animation. Historically, the maximum number of levels were 6; 1 background and 5 cels. Although cels were transparent, exceeding 5 cels would cause color darkening, blurring and shadows. This is why the exposure sheet listed a total of 6 levels. I’ve made this discovery 5 years ago by watching this video. It is uploaded by the same YouTube user who uploaded the video in this topic’s original post. Take a look: 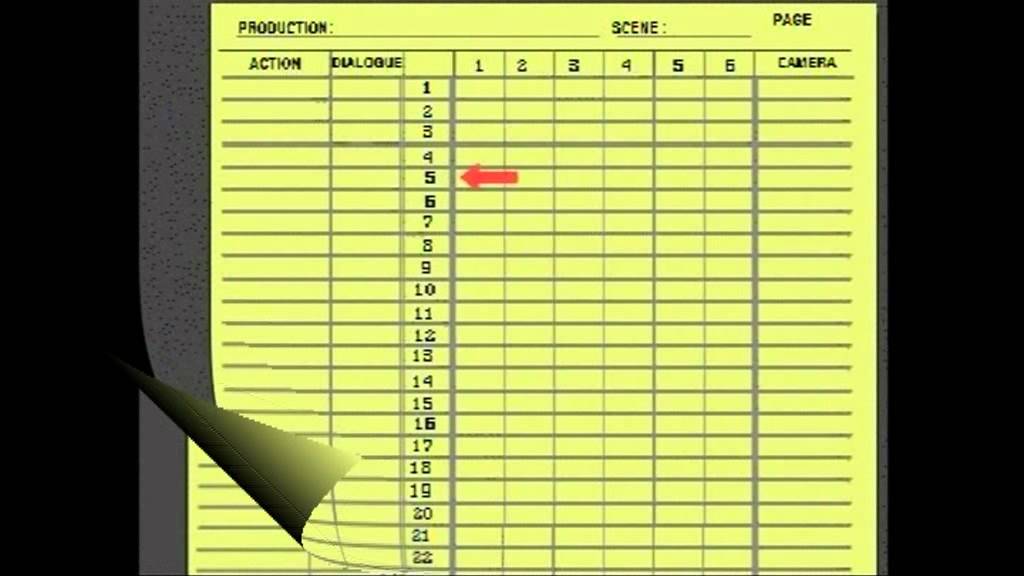 Thankfully in the digital age, we don’t have to worry about the maximum number of levels/layers; we can have add layers freely. Also, we can pick from millions of colors instead of hundreds. We also eliminate the need for paper as it is cumbersome and expensive; it takes up a lot of space in a room; either hundreds of thousands or millions of drawings. Real acetate cels get pretty expensive, too, as they may take hundreds of thousands of them to make animation with.

In my opinion, you may or may not agree, digital hand-drawn animation is the best, quickest, fastest, and easiest way to make animation.

Anyway, according to your comment, you said you never number your drawings when you’ve joined the digital bandwagon, but I prefer to number mine so I can keep track of how many drawings I’ve used in each animated motion picture I’ve made for the record. Not only that, but also so I can track the animation frames on the canvas in relation to the timeline, identify which level/layer is about to be drawn on, and to help me know which are keys/extremes, breakdowns and inbetweens. To me, assigning numbers to drawings makes animation not only easier and quicker, but also more clean and organized.