Hi Pencil2D users. I hope some of you want to help testing the new camera.

The New camera is developed in three stages, and this test build is about stage 2.
Stage 1 was about defining easing for the camera movement, and is already merged into the master branch. This means that it is (in) the nightly builds, and you can test it there. You right-click on the camera-frame to set the easing.

Stage 2 is about defining the camera field (placement, rotation and size) in a more intuitive way.

It is a long lasting coding process, that is close to the finish line. That depends on eventual bugs, suggestions for improvement and other things that might come up.

I have made a tutorial, that you’ll find here: 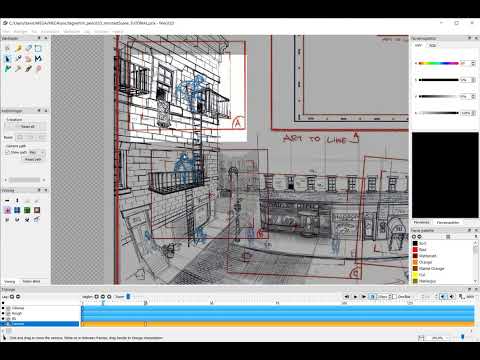 It should tell you what is needed to test it. If not - please ask here in this channel.

I have four development builds, and a test scene:

The test scene has a camera layer and a bitmap layer with a layout. The test scene must be downloaded to be useful, but you could also make a scene yourself… (no pun intended)

Those who depend on a legacy build must excuse me. I only provide the four main builds. Sorry.

Hi. I have found some issues to fix & discuss

Note: I will update with videos later on

With at least 3 frames

Note: This issue has a similar reproduction steps to the previous section

Given at least 3 frames, If the first and third camera frames have equal position values (e.g default at [0,0]) the interpolation handle will be disabled. It will only come enabled if the third frame position is even slightly different than the first.

The motion path handle to modify the trajectory for any given interpolation will be set to the position of the last reset camera frame position instead of appearing in the middle of the path.

Resetting the camera transform an empty frame, with 3 or more frames in the interpolation, will cause the second interpolation path handle to appear in the origin position.

Moving the camera position will reset the motion interpolation.

There is an expectation as a user that the motion path will only change when I want it to change. If I move the first or last camera frame involved in its motion, I want to trust the software to keep the motion path predictable.

If I already have an arched trajectory, moving the camera should only change the position of the camera viewfinder while preserving the motion path curvature.

For a better visual aid, look into Inkscape when you move a control point on a curved path, it does it’s best to preserve the curvature while moving either start or end points since the “tangents” or bezier handles do not change angle or length.

This makes even less sense since rotation and scale does not contribute to the motion math, so resetting them should not reset the motion path without user approval.

creating a new frame inbetween and deleting it will reset the motion interpolation.

I would expect that the path would be preserved If I delete or move the frame regardless.

For a better visual aid, look into Inkscape when you remove a control point from a curved path, it does it’s best to preserve the curvature.

Thanks for your thorough test. i only have short time before I leave for a 4-day vacation, but here’s my first comments.

The motion path is drawn as a bezier curve with two points, which are the centers of the two keyframes that it connect. That’s the solution I’ve been capable of coding. This means that if you delete a frame in between other frames, the path will be reset as you mention.

I’m aware that Inkscape, and several other programs, have solutions where you can define bezier-points to your curve, and make it curve all over the place, but if we want that, somebody else must code it.

I would like to add, that I think my solution fits our philosophy, that the software should be easy and intuitive to use.

I can’t reproduce it. It will presumably be included in your video, so I will try again then. Maybe I’ve misunderstood your description.

This won’t work the way you would think, because the path modifies the transforms as well, meaning that if you don’t reset the path when you reset the translation, then the camera will jump in and out, because the midpoint hasn’t been centered.

You can see the result of what that would look like here:

The reset path still has a purpose, for when you want to reset the path only but it’s true that it’s a bit misleading that resetting all transforms also resets the path.

There is however a bug , the interpolation happens on the next frame, so pressing reset all makes you think it does nothing but it actually resets the transform of the previous frame.

Hi, We’ve had some feedback, and here is a new version of the New Camera branch, with more stability, and some extra work with the paths:

Happy testing, and thanks for the help so far!

@davidlamhauge Apologies David I’ve been quite busy and forgot to reply to this.

When I mentioned Inkscape was only in the context of what I was suggesting. I understand that a visual aid might be preferred but honestly I haven’t been able to rerecord one for each point.

Related to the crash however these are the reproduction steps under Windows 10:

Note: Make sure that the second camera keyframe is on any frame after frame # 7

@CandyFace Hi, sorry It took me too long to answer, though I’m a bit confused about the scope of your reply I’ll do my best to answer.

Most of the issues are geared to how the camera motion path behaves and how it is presented, so I’ll list here how I think these are related to the one you picked specifically:

I’ve tried again, and I still can’t reproduce it. I’ve tried both Ctrl+N and File → New, for new file, and I can’t get it to crash.

EDIT: I’ve now also tried to load the preset in stead of the last used file. Still no crash…

@davidlamhauge are you testing the previous build or directly form Qt? It might be something that only occurs in the release build for the branch. It’s also happening in the latest build you shared recently, so I don’ think it’s a coincidence.

In the new build I tried it the first time and it didn’t work (I put the frames too close together) the second time I put the camera keyframe exactly on frame 7 and then moved the camera field a bit on that frame. Then moved the playhead exactly to frame 4, and when I pressed File > New it crashed.

I apologize as well I forgot to add a step that seemed obvious at the time, and as such I thought I had included it. You HAVE to move the second keyframe position with the move tool. I’ll update that in the previous steps. Camera Transform Testing Branch - #11 by JoseMoreno

I can see that the tutorial video, at the top of the page, has been viewed more than 50 times now. That hopefully means that many of you have been testing the new camera.

Please report back here, what you think. The more reviews, the better. Thanks!

Just saw the tutorial video and am impressed. I’ll download and review it. I’ve been using Pencil since Pencil 0.4.3b and every upgrade since. some great and some very good. I think this is now getting to be a real player. I used it as it was created as a pencil check app. With improved brushes and a powerful camera editor my animatics will have some real pop.

We’re looking forward to your comments, about the new camera. Like you, I think it will be a game-changer.

Since my post on May 19th, there has been 90 more views of the tutorial video, so I hope many users are testing the special branch, and report back.

I’ve been busy outside of drawing this month but have tried out the tutorial video for myself and am very impressed with the way it works. So far it seems to be working well and is stable. As the summer ends I’ll have more time to give it a good stress test. Pencil 2D is getting some real professional upgrades!

We want everyone following this topic to know that after a lot of work to iron out issues, this feature has been merged yesterday into the main version of the software under the developmental builds, so everyone can test it out regularly and help us catch bugs are improve use cases.

That’s awesome! Will my old camera functionality be deprecated or corrupted in any way?

We’ve built upon the existing camera data, so you should be able to open a project with the old camera interpolation and see it working in the nightly build.