My most recent animation. I’ve been experimenting with Blender 3D, and decided that instead of taking videos and superimposing my animations, i would use (hopefully) blender.

The room is not final, and i hope to maybe do a longer animation with this method sometime.
Side note, Pencil 0.6.3 is pretty awesome

Here’s an update to the room; I modeled a bed in blender and put it elsewhere in the room. I was going for more of a low-poly feel for this room 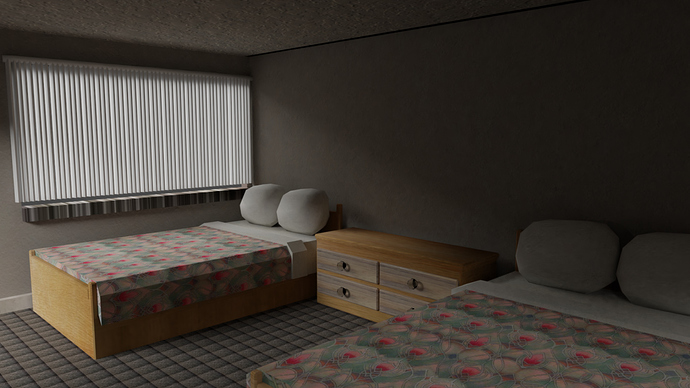 new-bedroom-render-1.jpg1353×762 268 KB
So, i couldn’t think of an animation for this update, but this is what the room looks like now. There were MANY issues with the previous one, one issue being me rushing to get it done and working on all the pieces of the house at the same time. Now, I’ve been slowing the process down and modeling the house a room at a time. The biggest difference here is that instead of two rooms, i just made one, as i’m no house designer and it was the easier / more visually ‘nice’ looking choice at least for me. I re-modeled everything and added blinds and a window that actually lets light through. Blinds are important here because rendering grass is a HUGE pain and i was having trouble designing the outside. To remedy this, i can have blinds and a colored outdoors area so it is implied that there is an outdoors and a lawn and such, but you don’t have to see it. Things may change with the camera angle but for now, this is fine