Well, here I am with some issues (not sure if we have to open a new thread for just Issues from Pencil2D_MyPaint)

As there is no Zoom feature here, I started by increasing the size of the canvas and used Space keyboard for moving it around as I was painting (not animating yet

)
So, say I have the whole canvas painted and decide to re-paint an area of the canvas but for that I need to move the canvas (Space keyboard). After that everything from the canvas that was hidden from the main viewport will be deleted. So be aware

I tried to paint an image from a photo and after a while of being painting, Pencil2D started to paint at will deleting some parts of the colouring that I have made or it acts replacing them with square colours presented on the last strokes…

That said, I started painting this window (see image here) and re-painted it about 10 times if not more, but with no luck at the end since Pencil2D insisted in changing things.
I decide to quit for now, in order to keep my sanity

till this issue is fixed.

Thank you so much it looks amazing!
I’d love to try this, but I’ll have trouble to understand git and stuff and how to b…build

Again, this is a pre-aplha preview only of the work in progress. It is not intended for actual work and may be very unstable as it is incomplete. So, please, don’t report issues about it yet.

As I said in previous posts, zooming rotating and moving the picture are not working. I should have been more specific and say that in the case of moving, it is not working because it “eats” your picture right now. I will disable the feature while it is broken.

As for the other bug, it may be linked to similar issues with the canvas. There is still some work to do with the canvas. Having an infinite canvas makes it a bit tricky to implement so I still need to find the right logic behind it.

I just noticed this today and I think that a brush library is a fantastic addition to Pencil2D! Thank you for all your hard work!

I managed to build it too (yay!), and I must agree that the brushes feel great. Very quick and responsive. I’m looking forward to seeing them working with all of the brush properties so I can really take full advantage of them.

One detail with the new brush library is that they introduce directional brushes like the chisel. I was wondering if you had any plans for including direction adjustments for those brushes? I know that the current master doesn’t have that feature.

I would really like to help work on this project. I can’t promise much though since I’m barely beginning to understand signals and slots.

@gregorysonofcarl, thanks for the suggestion and the help!

In a first step, I plan to only have the brushes that correspond to the current Pencil2D tools (Pencils/Sketching, Pens/Line-art, Brushes/Painting, Erasers and Smudge). This way, the user experience is not much different from the current application while having a much better brush engine as currently. If the brushes you are talking about fit in the Sketching, Line-Art or painting category, we may add them straight away.

We may include more tools in the future but it won’t happen before having a first stable version of Pencil2D and before being discussed of course!

It looks very good @kaiko! I am happy to see some beautiful stuff already being done with this version!

… and gave me some inspiration.

Here an image that I am intending to use for a simple short animation. It will take some time though to finish it and hopefully meanwhile some new development in Pencil2D will allow other approaches.

Wow! That is even better! Well done @kaiko!

Here’s an example of what I’m referring to regarding directional tools. In this image, I’m using the “basic_knife_smudging_tool” found in the brush tool library. I manipulated the screen shot in GIMP to create the demo image.

Notice the beautifully drawn dial in the tool option widget that controls brush angle. I agree that it is important to avoid big changes to the user experience with single updates. Adding a feature like this should probably wait for a future project, but it will be on my wish list once MyPaint gets released into the wild.

I see what you mean! This has to be part of the settings and should be implemented if libmypaint handles it.

Thanks you so much, bro

There is still a lot to do and unfortunately, I had a busy 2016 year and didn’t get the time to work on it quite much. It doesn’t look like 2017 will be much better in that regard but I will do my best!

Here is another image done with Pencil2DMypaint.

(I couldn’t resist to paint it. I found it so imaginative)

SERIOUSLY! I don’t know what’s going on, but there is NO “.exe” file in the archive. How are all of you getting this thing to work?

@rdsp Hey Red. Whatever you’re downloading from feeef’s link is a source code version for developers and advanced users to work on. It was being developed alongside regular Pencil2D to become integrated in the future and have a better set of drawing tools for bitmap layers. However the developer had to halt this and we don’t know when and who might be able to continue his work.

There is no “.exe”-cutable file precisely because it doesn’t exist yet, or rather the developer has to create it by compiling the source code with special development tools. Namely the QT framework, QT creator and other trinkets that come with it.

If you want to tinker with that I suggest you read our advanced tutorials. But I warn you you’ll have to do a lot of reading if you’re not acquainted with programming.

Here is another image created with Pencil2D 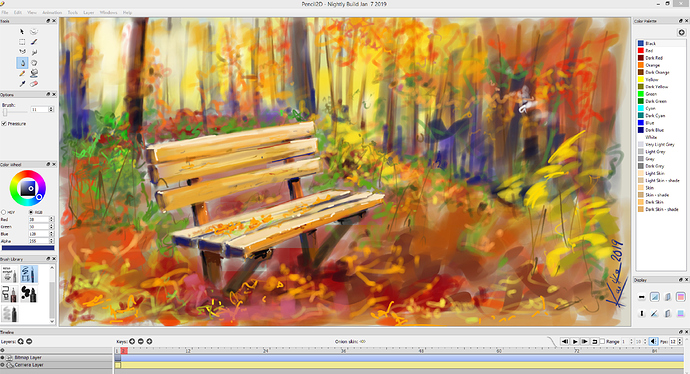 In case anyone is wondering, there’s currently a branch up to date with the current pencil version, it’s very WIP but bitmap drawing works. It’s based on feeef branch but there a lot of changes compared to his version. I have only been able to compile it on mac, but some tinkering should make it possible to cross compile. 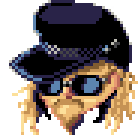 Pencil2D is an animation/drawing software for Mac OS X, Windows, and Linux. It lets you create traditional hand-drawn animation (cartoon) using both bitmap and vector graphics. Pencil2D is free and...